The Moneylenders In The Temple of Applebee’s

In case you’re one of the two or three people who hasn’t heard the story yet, it goes like this…

A few days ago Alois Bell, a pastor at Truth in the World Deliverance Ministries Church, was part of a group of twenty who dined at an Applebee’s in St. Louis. All in all, they spent over $200, and when it was time to go they evidently asked for separate checks. Ms. Bell’s check came to $34.93. Because there were over eight people in the party an 18% tip was added automatically in keeping with Applebee’s policy–an additional $6.29.

Ms. Bell, however, remembered that when Jesus admonished his flock to “render unto Uncle Sam what is Uncle Sam’s,” he didn’t say anything about giving a little to the poor, hard working young woman who just bent over backwards trying to make sure the experience of dining at Applebee’s was as wonderful as it could be given the fact that it was, after all, Applebee’s. So, in the spirit of Christian charity, Preacher Bell struck out the $6.29 that the computer had nicely computed and printed on her check and wrote in a big fat zero.

In case nobody’s told her yet, that’s an apples and oranges sort of argument. To begin with, Applebee’s wasn’t asking her to give the waitress a percentage of everything she owned or would ever make, which is what the tithing enforcers are after when collecting God’s 10%. They just want her to give 18% over and above what she spent for dinner as a one-off deal. No devil would be sent to her house in the middle of the night threatening hellfire and damnation if she didn’t continue to make payments to the waitress. None of that. Just six bucks and change added to her credit charge and she’d be through with it. 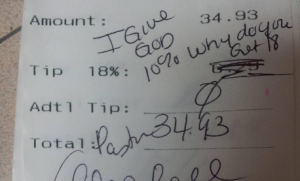 Besides, she doesn’t give God 10% anyway. She may give to people who claim to work for God 10%, but there’s no proof God ever sees a dime of it–or that the people who’re collecting her 10% even know God or are doing His work. And since she’s a preacher lady, does that mean she’s the one who knows God and is doing His work? Is she both the collector and the collectee? In that case, she’s not giving God anything, but is merely moving money from one pocket to the other in the name of he-who-has-never-been-seen.

So the waitress who was stiffed by this servant of God, Chelsea Welch, took a photo of this santified relic of a receipt and posted it on Reddit. By nightfall, everyone in St Louis, including the fifteen or so fine Christian men and women who make up the congregation at the World Deliverance Ministries Church, knew that the Right Reverend Alois Bell had stumbled and fallen short of the Glory of God. Can I hear you say, “Amen,” brothers and sisters?

Being a preacher, Reverand Bell understood that the time had come for her repentance. So now she’s talked to the folks over at The Smoking Gun, explaining how very sorry she was…is…whatever. She said that her scribbling represented a “lapse in my character and judgment.”

She was so sorry she called Applebee’s and spoke to the manager who told her the offending waitress has been fired for her transgression. There’s no indication that Bell forgivingly made the case for giving the waitress her job back.

What would Jesus do?

That’s the question fashionable Christians like to ask themselves these days whenever they’re feeling particularly sanctimonious. Indeed, what would he do? Would he consider the fact that she’s a mother of three and under a lot of stress? Or would he look at all of the percentage points flying by and make a connection with his past association with money lenders?

Published in Consumerism, Internet and Media