The report says that although there can be beneficial results from releasing gene-edited species into the wild, “this work poses major trade-offs that require the public’s consideration.” 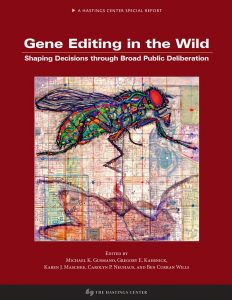 NEW YORK, December 21 — A new report released by The Hastings Center, a leading ethics research institute, finds that the complex issues raised by releasing gene-edited species into the wild demand deep and broad public engagement. The report, Gene Editing in the Wild: Shaping Decisions Through Broad Public Deliberation, provides a path forward to move decision-making from the realm of experts to a more inclusive, values-based approach using the technique of public deliberation – or deliberative democracy.

The goals of gene editing in the wild efforts are wide-ranging, and the benefits potentially transformative–such as preventing mosquitoes from spreading disease. But this work poses major trade-offs that require the public’s consideration.

The introductory essay, “Public Deliberation About Gene Editing in the Wild,” summarizes the key design elements that can improve broad public deliberations about gene editing in the wild: Framing the question and deciding when to hold broad public deliberation, choosing participants, addressing power, and accounting for and capturing perspectives that are hard to express. The introduction was written by the special report editors: Michael K. Gusmano, Gregory E. Kaebnick, Karen J. Maschke, Carolyn P. Neuhaus, and Ben Curran Wills.

“Regulating Gene Editing in the Wild: Building Regulatory Capacity to Incorporate Deliberative Democracy,” by Karen J. Maschke and Michael K. Gusmano, says that there has not been enough attention to how we should connect public deliberation to the existing regulatory process. The authors argue that, while federal agencies may have capacity to undertake public deliberative activities, there may not be sufficient political support for them to do so.

“Deliberative Public Consultation via Deliberative Polling: Criteria and Methods,” by James S. Fishkin, makes the case that Deliberative Polling, an approach developed by the author, can be usefully employed to engage representative samples to deliberate in depth in controlled experiments so as to yield a picture of the public’s considered judgments. Another it can be cost-effectively conducted online.

“The Decision Phases Framework for Public Engagement: Engaging Stakeholders about Gene Editing in the Wild,” by S. Kathleen Barnhill-Dilling, Adam Kokotovich, and Jason A. Delborne, puts forth a framework for shaping public engagement that tackles when and whom to engage on genetic engineering questions.

“Empowering Indigenous Knowledge in Deliberations on Gene Editing in the Wild,” by Riley Taitingfong and Anika Ullah, identifies Indigenous peoples as key stakeholders in decisions about gene-editing in the wild and argues that engagement activities need not only include Indigenous peoples but also should be designed, conducted, and analyzed in ways that confront longstanding power imbalances that dismiss Indigenous expertise.

The special report grew out of a Hastings Center project funded by the National Science Foundation, The complete report is available for download here.