I know what you’re thinking. You’re thinking the other side does that all the time. We don’t do that, you think. We don’t have to, for our reasoning is sane.

That’s how it should be, I agree. However, that’s not how it is.

Here’s an example. A few minutes ago I ran across this cute graphic that was posted by a couple of friends of mine on Facebook: 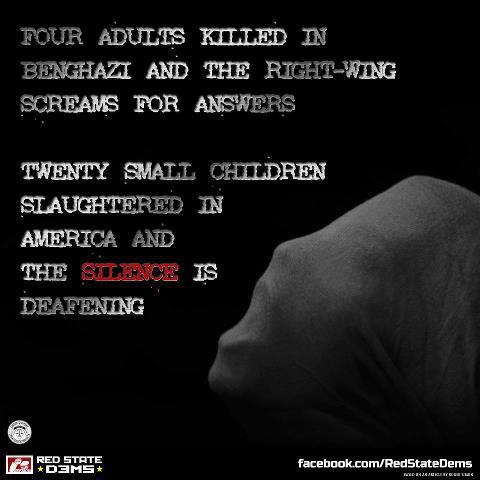 Now, I’ve known both of the friends who posted this on their walls since the early 1970s. I know them both to be good Progressives – probably even more to the left than that if the truth be known. I also know them both to be basically honest folks. I know for a fact that they didn’t mean to post an untruth. They just allowed sentiment to run away with them.

“Twenty small children slaughtered in America and the silence is deafening”

Sounds good, doesn’t it? And it’s somewhat satisfying, I must admit. Trouble is, it’s untrue and it’s unfair. Our opponents on the right are in the wrong in nearly every position they take. We don’t have to take cheap shots at them by accusing them for being something they’re not.

I can already hear some of you getting in a huff. What the hell am I talking about? Didn’t I see Hilary getting grilled by the Senate just the other day about how our side “mishandled” the situation in Benghazi? Don’t I see that the right is trying to make us look weak and misguided in a situation where we did exactly what we should have done? Isn’t that a cheap shot by the right?

Indeed, the right is acting like the blowhards they are when it comes to Benghazi. They know it, you know it, I know it. It’s true. Not only are the folks on the right “screaming for answers” about Benghazi, they’re demanding answers to all the wrong questions.

So what’s my problem? What’s my gripe?

My problem is with the next line on this cute little feel good graphic. What folks on the right are not being is deafeningly silent about “twenty small children slaughtered in America,” and that is what makes the graphic so unfair.

Our opponents on the right are mothers, fathers, aunts, uncles, brothers and sisters just like us. They are just as appalled by the senseless killing of school children as are we. Their ideas of how we should react as a people and what actions our government should take are different – greatly so. But they are not silent. They grieve just as we grieve.

We on the left are at odds with the right over many, if not most, issues facing our country. And it’s true that many of the right’s leaders can rightly be called “evil” or “stupid” or “uninformed” or “greedy” or “heartless.” But most right-wing voters sincerely believe that they are supporting what is best for our world and that we are the ones who are misguided and wrong.

If we remember that, we may be able to enter into a dialog with them. If not, we can tell them that they are a bunch of motherfuckers who don’t care if children are killed – which is not true and which will accomplish absolutely nothing–except to separate us even more.

Published in Bigotry, Internet and Media