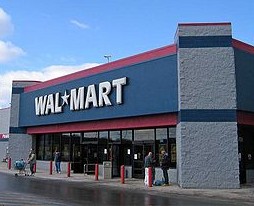 If we want to get rid of feudal lords in America, as I wrote about yesterday, we should start with Wal-Mart. Believe me, this won’t be an easy task. The smiles that Wal-Mart features in their advertisements are a facade, hiding pure ruthlessness and greed.

If Wal-Mart was forced to pay their employees an actual living wage, they would undoubtedly have to raise their “everyday low prices.” Their low priced business model is based on the assumption of unrequited servitude by their employees, ergo paying decent wages means they lose their competitive edge which they’ve demonstrated time and again they will do anything to retain.

What Happened On Wall Street Today

There was a major sell-off on Wall Street today, with the market losing 2.3%, more than it’s lost on a single day since 2011. Why? Evidently the investment crowd is panicking because Federal Reserve chairman Ben Bernanke indicated that soon, if the economy continues to improve, the Fed will quit printing new money willy-nilly for them to use to buy bonds in order to continue to stimulate the economy. In other words, they’re threatening to quit feeding the trolls.

Let me translate this for the hard-of-thinking.

I found this YouTube video the other day that I’d like to share with you, as it does a great job of explaining the amount of financial inequality we have in the U.S. right now. It’s probably worse than you realize.

This is based on a study of 5,000 Americans by a Harvard business professor and economist. He looked at their perceptions of income inequality in the U.S. and then asked them what adjustments they thought necessary to make the system fair and just. The study shows that most of us are very aware of the fact that too much money is flowing to the top of the financial food chain and that something needs to be done. However, as this video illustrates, it’s worse than we think–much worse.

Editor’s note: This article was originally published on FOSS Force. Reprinted with permission.

The internet activist group Demand Progress has released a short 2 1/2 minute video on YouTube that explains the implications of the legal wranglings between student Supap Kirtsaeng and textbook publisher John Wiley & Sons in a case that’s already gone before the U.S. Supreme Court and is now awaiting a ruling.

At issue is the reselling of new textbooks purchased cheaply abroad in the United States. Kirtsaeng, a Thai graduate student in the U.S., sold textbooks published by John Wiley & Sons on eBay that had been purchased by relatives in Thailand. The publisher is claiming copyright infringement, and so far has won all rulings in the Federal courts.

Monsanto: Maker of the Rules

Many of you already have a pretty good idea to what ends Monsanto will go to spread their poisonous genetically modified crops. The company is playing hardball and they plan to win at any cost. Unless we bring them down soon, they’ll pose a larger threat to human life than global warming, world overpopulation and all forms of pollution combined. What Monsanto wants is nothing short of complete control of agribusiness on a global scale, through their patented genetically modified seeds combined with their chemical herbicides and pesticides.

Exactly how far will they go? Ask Percy Schmeiser, he’ll tell you.

There’s a video that’s been making the rounds, David Versus Monsanto, that tells the story of Schmeiser, a 70 year old farmer growing canola, or rapeseed, in Saskatchewan in the Canadian Midwest. In 1997, he found that some of the canola growing on his farm, from seeds he’d been developing for decades, had taken on the properties of Monsanto’s patented Roundup resistant variety of canola due to cross pollination from nearby farms.

By Christine Hall on January 21, 2013
Today I ran across an old article, originally posted in 2010, 16 Facts About Walmart That Will Blow Your Mind by Ujala Sehgal on Business Insider. Actually, the piece was more slide show than article, but it succinctly explained some rather scary facts about this giant retailer. I thought I’d take this opportunity to go over some of the facts laid out in the article, with my own observations thrown in for good measure.

1. Walmart has more full-time employees — 2.1 million — than seven times the population of Iceland.

My first thought when I read this was about the irony of comparing any aspect of Iceland with Walmart.

Iceland was hit hard by the so-called “great recession” of 2007–2008. Prices on their local stock market dropped by 90 percent, inflation rose 18%, while unemployment increased by a factor of nine. Oh, at the same time all of the country’s biggest banks failed. However, Iceland has recovered nicely, not by bailing out the banks and leaving their private citizens to sink or swim. Instead, they concentrated their efforts on helping people get out from under crippling mortgages and prosecuted the bankers.

Guess what? It worked. According to Bloomberg their economy is now a shining example for the rest of us:

Who’s Money Is It Anyway?

Ever since the laissez-faire capitalist all but completely took over our economy, we’ve been told that we have absolutely no right to regulate business. If the Enrons of the world want to keep their houses of cards propped-up by breaking the back of Californians, we’re supposed to be perfectly fine with that – after all, it’s a free country and they should be allowed to do whatever they want. Likewise, if Walmart wants to employ practices that force their suppliers to move their factories overseas in order to stay in business, who are we to complain? After all, what’s the lifeblood of American towns and cites compared to the Walton’s or the Koch clan’s right to do whatever they like?

After all, it is their money.

Editor’s note: Evidently the powers that be are trying to keep this on the down low, but people in Spain have been taking to the…